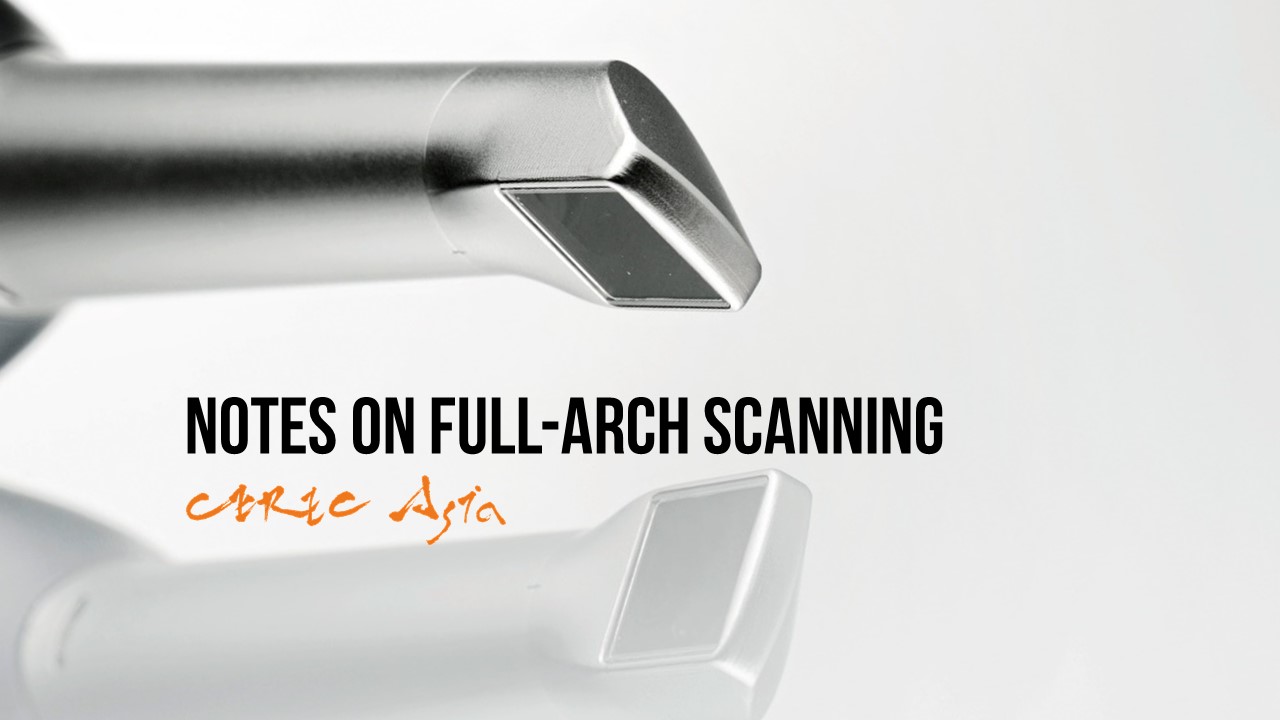 tl;dr: We have scientific and quantifiable results showing that some scanning techniques produce significantly more accurate results than others.

Getting a reliable full-mouth scan has always been an issue for intraoral scanners. Unlike desktop scanners, intraoral scanners have much smaller fields of view, which means a drastic increase in both the number and complexity of image-stitching operations. In such a case, the quality of the images become paramount, and short of changes in hardware, the primary control for the user is the method with which the scanners are manipulated. Therefore, proper usage of the intraoral scanner is very important. Naturally, the next question becomes: what is “proper”?

A recent report from CERECDoctors.com approached this question from a bite-registration angle. The main question they asked was, essentially:

Does the method of scanning the full-arch affect digital bite-registration?

So what method are they talking about, and how does digital bite-registration work? In a typical intraoral scanning procedure, we perform three basic scans:

To draw a parallel to traditional workflow, #1 and #2 would be the upper and lower stone models, while #3 is the bite registration. Whereas the traditional bite registration material is a negative impression, the digital buccal scan is a positive reproduction. By correlating the buccal scan with both the upper and lower scans, the three dimensional relationship between the latter two can be established.

You might be thinking: what if the buccal scan doesn’t exactly match the other two scans? Actually, an exact match is technically impossible due to differences in boundaries, soft tissue, and other inconsistencies. This means that the computer has to perform some averaging calculations and decide on a best-match scenario. For quadrants and other smaller scans, the software generally does a decent job. However, as the length of the scan increases, things get complicated.

Imagine using a 15-cm ruler to draw a straight line that is 5 meters long. No matter how meticulous you draw each segment, the final line will not be perfectly straight. If the line is now 50 meters long, it’s reasonable to assume a larger deviation will occur, since the errors accumulate over each 15-centimeter iteration. Scanning a full-arch is very similar. As you move the scanner head across a surface, individual images are stitched together rapidly to form the final model. With longer scanning areas, the errors ultimately add up to cause more and more deformations.

So let’s go back to our upper- and lower-arch scans. If they are sufficiently deformed, then it is not a surprise that software has a hard time superimposing a third, buccal scan and trying to figure out what the “best-fit” is. This deformation is the crux of the issue in the report from CERECDoctors, where they investigated the reasoning behind unreliable bite registration in full-mouth scans.

Results from the study

The first observation that the report made was that where you scan the buccal bite matters. Given the same patient (or typodont), if you scan the bite registration on the right side, the software gives you heavier occlusion on the right; similarly, a left buccal scan gives heavy occlusion on the left. This is obviously not ideal, and given what we know about deformations now, how do we get around this issue?

In the previous example, the full-mouth model was scanned in an arbitrary method with no predetermined pathway. From our experience at our training center, most first-time users naturally and understandably subscribe to this sort of random movement of the scanner head. Unfortunately, this has been shown to result in more stitching errors and therefore more deformation.

In the CERECDoctors report, they recommend a different method of scanning called a Linear Scan. The idea was adopted from the CEREC Ortho software, which was designed specifically for orthodontic full-mouth scanning.

Basically, in Linear Scanning the full-arch is scanned in three continuous and linear scans, followed by several rolling scans that “tie” the linear scans together. With no backtracking during the linear scans, the software seems to be able to produce a model with minimal deformation. Therefore, it no longer matters where the buccal scan is, the final occlusion of the full-arch models is the same (see figure below).

Putting numbers to the deformation

This deformation problem is not new, and at the CEREC Asia training facility we have been advocating the Framework Scan method (our version of the Linear Scan) for more than a year. In order to prove to ourselves that doing a Framework Scan is actually beneficial, we decided to perform a small study to quantify the deformation.

One way to simplify the calculation of full-arch deformation is by taking the linear error between two reference points. The assumption here is that with greater error, more deformation has occurred. Therefore, by comparing different methods of scanning, we can determine if there are significant discrepancies in accuracy.

First we fixed an easily-discernible physical marker on a typodont in the 18 and 28 location, and made a stone reproduction so that there are no movable parts. Then we tested four different methods of using the CEREC Omnicam, and compared their results against a desktop scanner (InEos X5). To do this, we use a computer software to measure the linear distance between our markers on each model (see figure below), and then calculate the differences between them.

Here are the results to our test:

So the five scanning methods that we tested were:

In short, our results show that CEREC Ortho, Framework Scans and the InEos X5 desktop scanner show similar cross-arch stability. Since it is rather difficult to categorize an arbitrary scanning method due to its randomness, we decided to compare to the official guidelines from Dentsply-Sirona instead. Even there, statistically significant differences can be observed. Though it should be noted that these guidelines were not intended for full-arch scanning.

In summary, while the quality of the tool matters, it’s equally important to use it properly. If you have any questions, feel free to comment below, or join our discussion over at the Facebook group. We are constantly looking for ways to improve, and would love to hear about your personal experience with any intraoral scanner regarding full-arch accuracy.

Anyway… what’s up with the 2016 guidelines getting its ass whooped it by an older guideline?