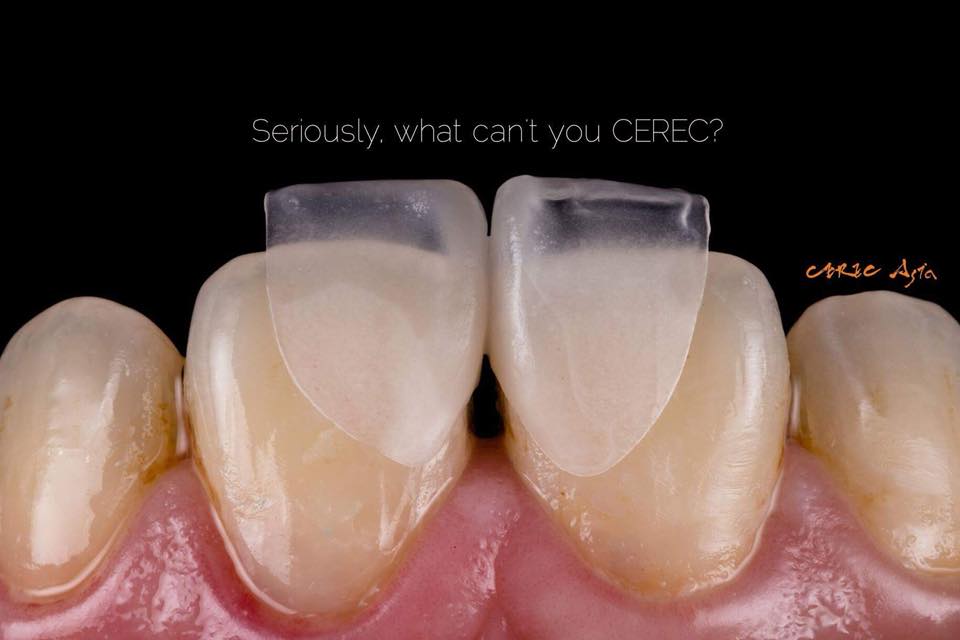 So last weekend was CEREC Asia’s annual event, a culmination of what we had worked toward throughout the 2017 calendar year.

Amidst the various special topics on digital dentistry, there was one clinical case that was of particular interest: the non-prep CAD/CAM ultrathin veneer.

Personally, I’m not too fond of these non-prep (or minimal-prep) principles because they either have very niche applications or require a balance of structural integrity. They also take a hell of a lot more work than typical veneers both before and after delivery, and frankly, I’m a pretty lazy guy.

Besides, everybody knows that milled ceramics have their limits, right?

Then on that fateful day, I saw this on my Facebook feed. It was a friendly jab from a master dentist who does some amazing restorations, albeit without CAD/CAM.

What have you done… As soon as I saw those simple words, my heart sank. Perhaps because I knew a certain dentist, who will remain anonymous (it’s Michael), who will not take these challenges lightly, jokes or not. Sure enough, the next day he volunteered me to take on the seemingly impossible task of replicating the same result but with CAD/CAM. In theory, I could’ve said no to the boss, but then I like having a job.

So with less than two months left to our annual event, we had to somehow figure out a way to create a milled ultra-thin veneer. But just how thin is ultra-thin?

If you’ve ever taken a close look at how ceramic milling works, you might be surprised that it works successfully at all; coarse diamonds strike violently at brittle glass, all at incredible speeds. But not all ceramics are created equal, so the first thing we needed to figure out is how thin each type of ceramic can be milled without chipping at the margins.

After bleeding a mountain of cash, we got a pretty good idea of what each type of ceramic is able to handle, and which of their corresponding marginal designs are optimal.

Our results have not yet gone through rigorous scientific validation, but of more than a dozen different ceramic blocks that we tested, we found that Enamic performed the most consistent. This was especially true for sub-200 micron restorations. It was time to put our theory to the test.

Not gonna lie, it was a big surprise to find that non-prep veneers are actually quite doable as a single-visit CEREC treatment option.

At our training center, one of our primary tasks is to standardize and optimize new workflows. So while this first case took an entire day due to trials and errors, we have already cut down the time needed by more than half in subsequent cases.

So what began as a challenge, became an obsession, became a team effort, and then eventual reality. On behalf of CEREC Asia, I would like to thank all the crazy dental professionals who contributed to this fun project.

Great article, what do you think about cerasmart ?

Thanks! I also did a whole write-up and analysis on Cerasmart here. Enjoy!

Do you know where I could get work done like the case outlined in the “How thin is thin?” article (ultra thin non-prep/minimal prep veneers?)

If you’re a dentist working with CEREC then it’s already quite possible with a little practice! Drop me a msg on Facebook and we can discuss the methodology further.

Stunning result, thank you for sharing, we have Cerec office and Inlab, how can we get online training for creating ultra thin restorations.

Hello, beautiful case. And what about milling strategies? Do you use extra-fine burs? Many thanks

Thanks for you comment! Since this was an older case, we didn’t know a lot of different milling strategies back then. We used extra-fine burs for sure. But the secret is in the geometry of the veneer margin 🙂

Many thanks for your reply, congratulations again